The BLS “Great Night Out”

Their Annual Fund Raising Event was as much fun as it was a Success.

TALOS was honored to be a sponsor at the BLS “Great Night Out” dinner gala held at the British Embassy in Kuwait.

Damas Jewellery stores were also represented who are the exclusive retail partners of TALOS in the GCC.

Mr. Evangelos Angelides, Sales and Marketing Manager for TALOS in Europe flew in from London to attend the event.

“It was an honour to represent TALOS and see the good work that The BLS are doing through their charitable work and their strong friendships they form as expatriates in Kuwait. We wish them continued success in all their efforts in Kuwait as well as in the UK. 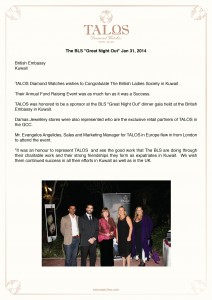 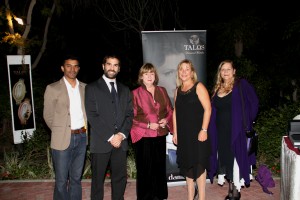 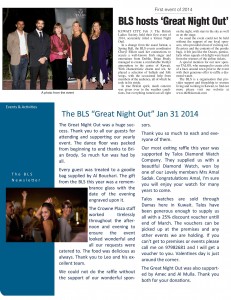